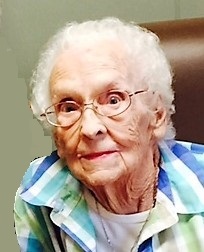 Lucille McNeill Burkhart, 95, of Raeford, NC died Tuesday January 3, 2017 at her home.She was born in Hoke County, NC on April 13, 1921 to the late William John and Addie Mae Baker McNeill. A graduate of the Hoke County High School Class of 1939, she completed a business class a Flora McDonald College and started working as a telephone operator at Ft. Bragg. It was then that she met her husband of 73 years, Richard Lewis Burkhart, when connecting him to a wrong number. She traveled throughout the US and the Orient as well as enjoying many cruises. She was an avid bridge player and was most famous for her brownies. She was preceded in death by her husband, Richard Burkhart; parents, John and Addie McNeill; brothers, Edward McNeill, Robert McNeill and Floyd McNeill; sisters, Margaret Willis and Janie Barbour. She is survived by daughters Marsha Lucas and her husband Bob and Elizabeth Godwin and her husband Michael; sister, Edith Newton and her husband Edwin; brother, Lewis McNeill and his wife Sarah Louise; 5 grandchildren and 7 great grandchildren. A visitation is scheduled for Friday January 6, 2017 from 10:00-11:00 AM at Raeford Presbyterian Church, 128 W. Edinborough Avenue, Raeford, NC 28376, with funeral services following at 11:00 AM. Burial will follow in Raeford Cemetery, with her nephews, Marshall Newton, William McNeill, John McNeill, David McNeill, Wayne Willis and Bo Barbour serving as Pallbearers. The family suggests Memorials to Raeford Presbyterian Church Building Fund, P.O. Box 1570, Raeford, NC 28376, in lieu of flowers. Arrangements by McNeill Mackie Funeral Home of St. Pauls.

To order memorial trees or send flowers to the family in memory of Lucille Burkhart, please visit our flower store.